Often AV software relies on simple signatures to detect malicious software and I needed an automated tool in order to confirm this behaviour and be able to quickly produce a working bypass. That’s why I wrote x0rro, a simple crypter based on Radare2 that supports both x86 and x86_64 architectures for PE, ELF and MachO executable formats.

Let’s identify our requirements in order to kick off the design phase:

In order to fulfill our requirements, I decided to implement a software based on Radare2, the Libre and Portable Reverse Engineering Framework.

I chose TypeScript as language and NodeJS as runtime to be able to quickly prototype a Proof of Concept and the library R2Pipe to communicate with Radare2 (there are bindings available for the major languages, including JavaScript (NodeJS) and Python).

For some functionalities there are currently not available in Radare2, such as adding segments/sections and changing their permissions, we will resort on the Python library LIEF.

In order to obfuscate specific regions of the executable, we will use a simple 1-byte XOR encryption, that will be just enough to bypass static signatures: the main idea is to XOR them ahead of time and insert an assembly stub that will do the decryption at runtime.

On Linux and Mac Os X, we also need to invoke the mprotect syscall in order to enable rwx permissions on the memory pages that we want to encrypt/decrypt.

We also need to produce a valid Position Indipendent Code for our stub in order to support PIE executables:

The template for the x86 Linux will be something similar to the following:

After a couple of weeks of development, x0rro is now ready to be released and it supports the three major executable formats, i.e. ELF/PE/MachO, and both x86 and x86_64 architectures as per our requirements. Feel free to grab the source from GitHub or installing it directly with NPM.

Install Radare2 from master branch and make it available on the $PATH:

To view the usage of all the available commands, you can use the -h switch:

An example using the code cave technique to encrypt the .rodata section:

And by adding a new section instead:

We can achieve the same result by using the interactive wizard, as shown here: 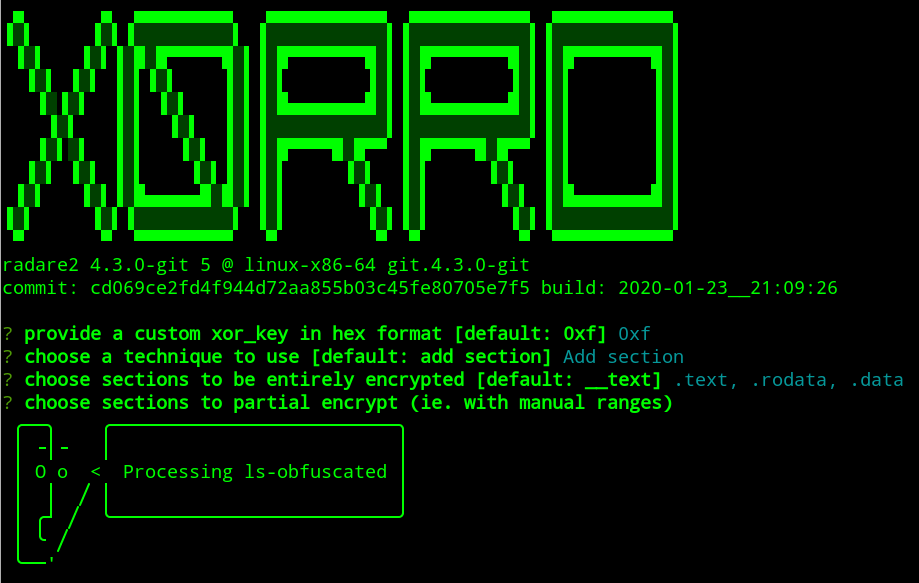