Historically, replacing built-in accessibility tools is a well-known technique to circumvent the security of the Windows login screen. This can be very helpful if we lose the user’s password but we have physical access to the machine, but are you aware that, given few preconditions, this can be also used to exploit remote machines when combined with arbitrary file writes? 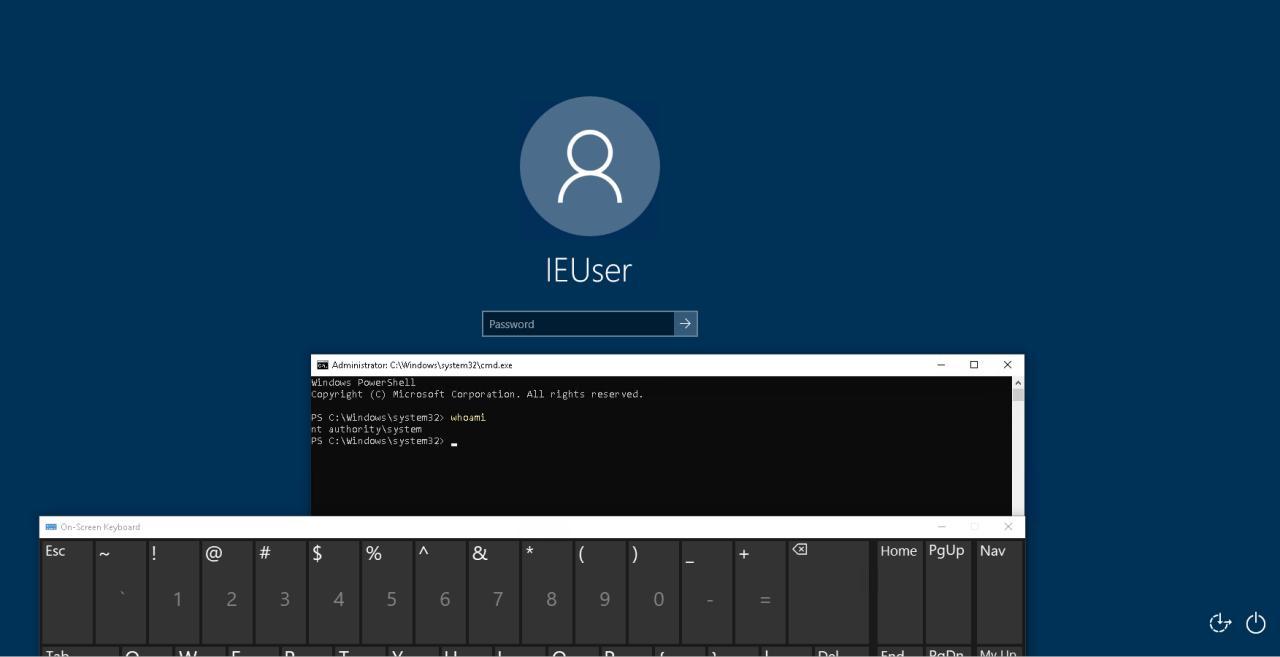 A well-known technique to get access to machines where we forgot the login password is to physically unmount the hard drive, attach it to another workstation and replace the C:\Windows\System32\sethc.exe binary with cmd.exe. After doing that, we can put back the hard drive in the original machine and proceed again to the login screen, where this time we can abuse the “sticky keys” (i.e. pressing five times SHIFT) to pop up a command prompt running as NT AUTHORITY\SYSTEM and change the forgotten password ourselves. The same concept can be applied in scenarios where an Arbitrary File Write vulnerability exists in order to achieve command execution at the highest privilege role available.

sethc.exe is not the only binary available for this purpose, the list of accessibility features executables includes:

An adversary can replace one of those executables by using an Arbitrary File Write vulnerability to escalate his/her privileges to NT AUTHORITY\SYSTEM.

On Windows 10, we can adopt a variation of this attack by exploiting a known, but not very documented on the Internet, DLL hijack vulnerability present in the On-Screen Keyboard osk.exe executable.

In particular, when osk.exe is executed it looks for a HID.dll library. The original DLL is present at location C:\Windows\System32\hid.dll but osk.exe first looks for it at C:\Program Files\Common Files\microsoft shared\ink\HID.dll.

By planting a malicious DLL at that location, we can intercept the LoadLibrary call and achieve command execution in the context of the user running osk.exe without messing up with the original executable, effectively avoiding breaking any existing accessibility feature and skipping in toto noisy executable replacements in C:\Windows\System32.

This technique can also be used when the adversary doesn’t have physical access to the target machine via the Remote Desktop Protocol (RDP). For example, let’s imaging a scenario where we have access to a remote workstation where we can use an Arbitrary File Write vulnerability to plant our malicious DLL. In the past, there was a known, handy techniques discovered by James Forshaw used to kick off on demand the execution of our DLL on Windows 10 as NT AUTHORITY\SYSTEM but it was patched:

If those techniques are not available, e.g. we are dealing with an older release of the operating system, we may still have a possibility to abuse the accessibility tools to load our EXE/DLL by using the techniques showed above, but first of all we require RDP to be enabled and we need to ensure that we are able to properly connect to it, in particular if Network Level Authentication (NLA) is enabled, as per default after Windows Vista, since NLA requires the client to pre-authenticate before the graphical RDP session is created.

So in order to use we need to meet the two following requirements:

If NLA is not enabled, we can simply connect locally to the RDP service without any credentials and trigger the On-Screen Keyboard from the login screen within the RDP session. 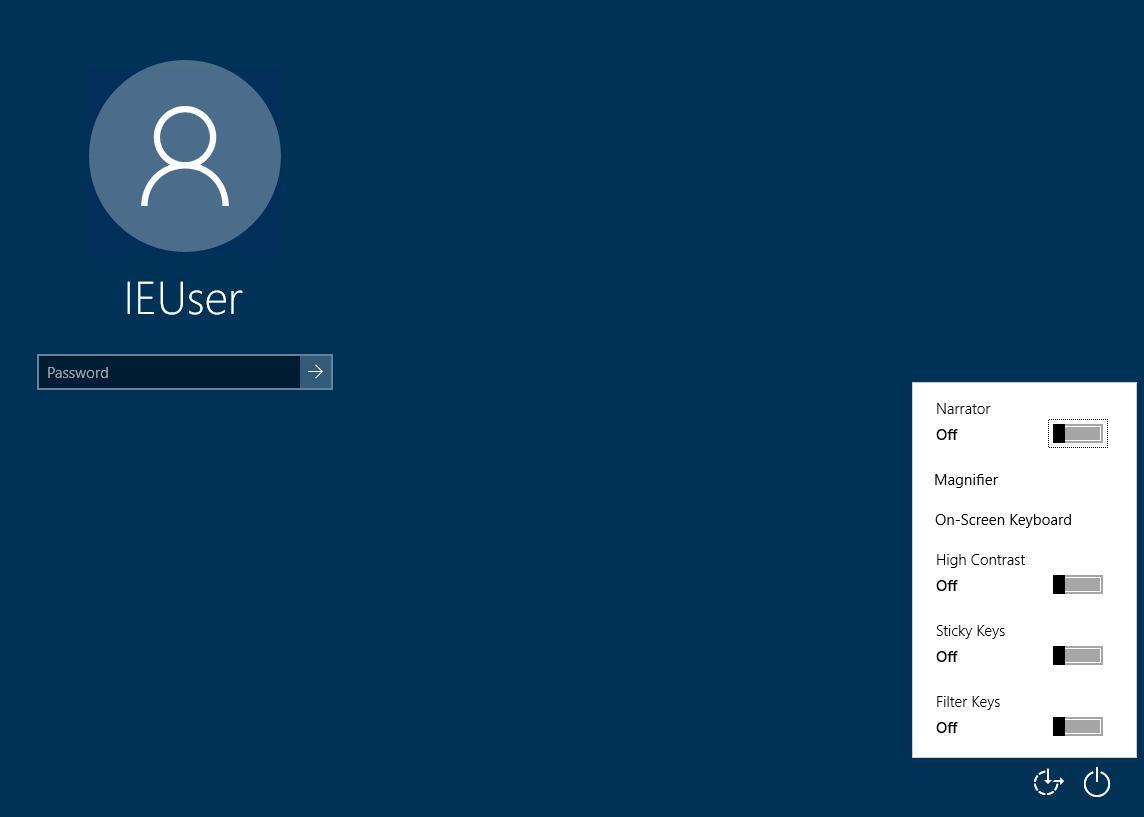 If NLA is enabled, we need valid credentials in order to reach the graphical interface within the RDP session. After we have successfully authenticated, we can trigger the creation of an On-Screen Keyboard instance by NT AUTHORITY\SYSTEM by manually locking the session to access the login screen or by typing the following sequence: 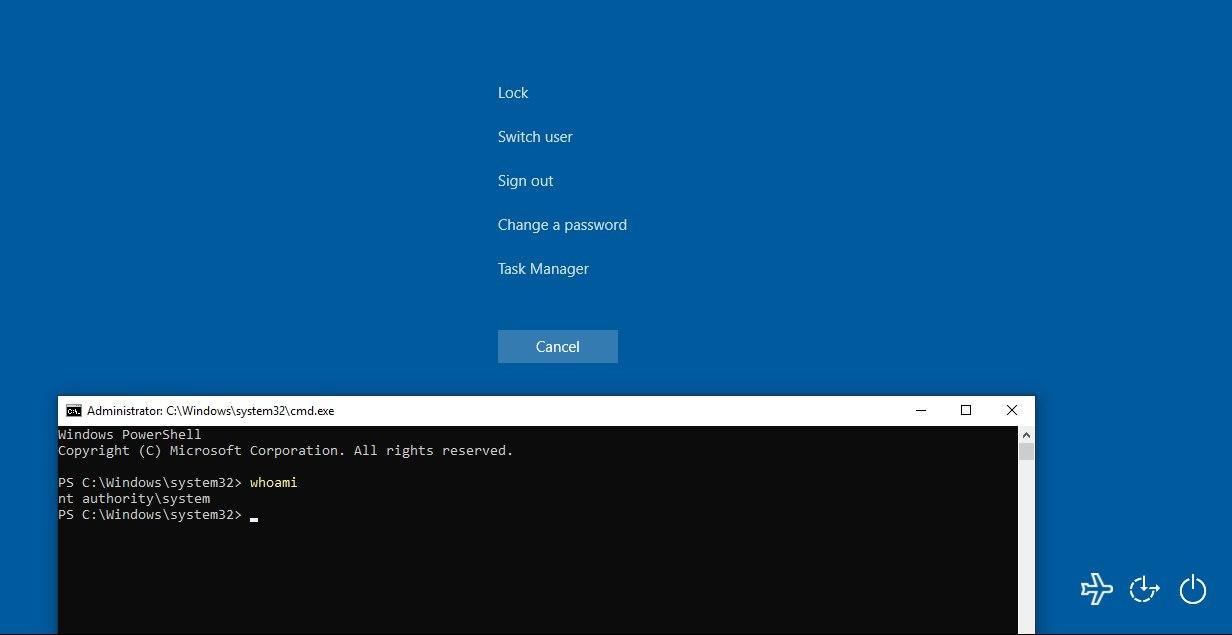 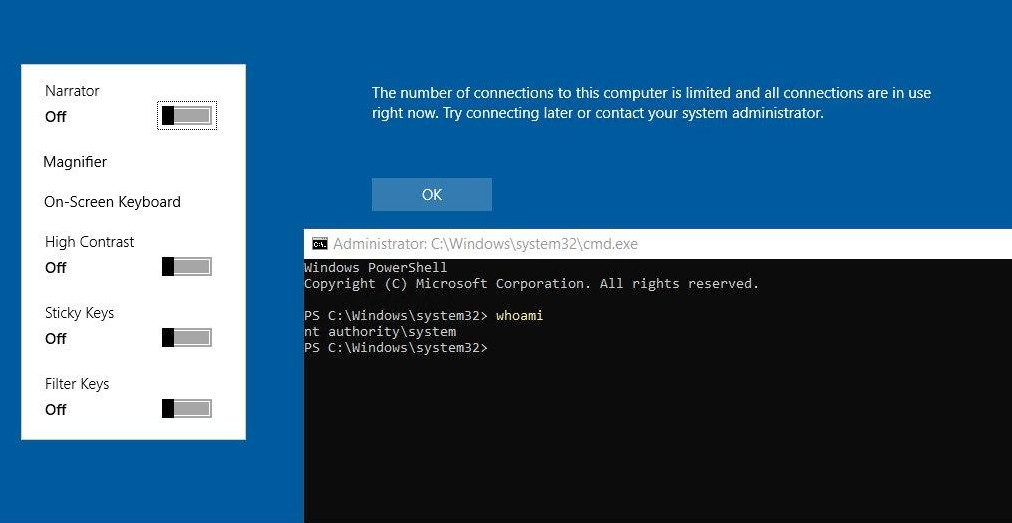 In order to mitigate the effectiveness of the technique, it’s suggested to keep enabled NLA, as it will require valid credentials in pre-authentication phase and will also mitigate other exploits targeting the RDP protocol. If RDP is not strictly required, it’s suggested to entirely disable it.

To detect when this technique is used, it’s suggested to monitor for changes to all the binaries mentioned above, including the location of the potential hijacked DLL (HID.dll) affecting osk.exe.

Abusing built-in accessibility tools is a well-known technique that you should be aware of and protect yourself from. This particular technique is also described as T1015 in the MITRE ATT&CK framework.