Since the release of Beacon Object Files (BOFs), I wanted to support them as a new kind of output format in PEzor. The main challenge was to find out a reliable technique in order to reflectively execute arbitrary, unmodified payloads and capture their output. After a short research, I was able to develop a working template to execute shellcode within the beacon process and capture the output in order to send it out to our C2 instance, effectively implementing a reflective execution first workflow for post exploitation jobs. Let’s dive into this short journey!

In the beginning, on NT systems, operators and actors were used to touch the file system for any post exploitation action they were tooking and, at that time, antivirus products were mostly based on signatures of disk artifacts to look for. Thanks to following research about reflecting loading and executing DLLs in memory by Stephen Fewer, that was documenting in an open-source fashion the process, the mainstream scenario shifted from uploading artifacts on disk to remotely inject payloads in secondary processes. 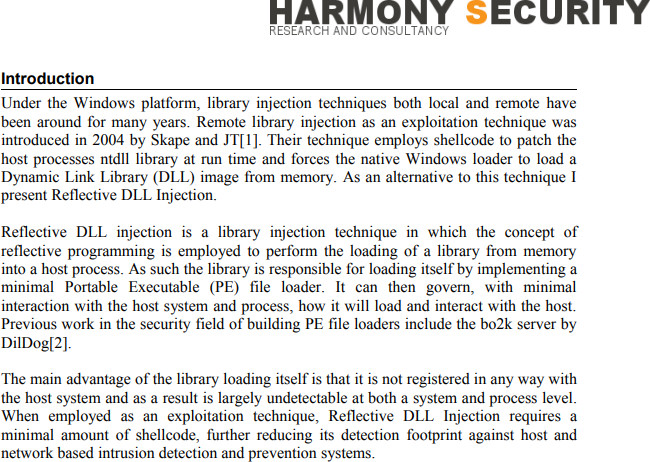 Historically, popular command and control frameworks, such as Metasploit and Cobalt Strike, greatly relied on the fork-and-run paradigm as execution technique of choice to run post exploitation modules on compromised hosts. The flow of this technique is:

The OPSEC implication of this technique is that each time we need to execute a post exploitation capability, we first need to spawn another process to inject the payload in. In current days, this may not be suitable for advanced, red team operations, in particular when fighting against next-generation EDR/XDR.

Inspired by the Invoke-ReflectivePEInjection cmdlet, I started to investigate how to implement a similar technique within Cobalt Strike. As stated in the notes of the source code, the cmdlet is only partially able to retrieve the payload output: in particular, the PowerShell process is not able to capture the output, but, if run locally, it will be sent to the console host process, meaning that we will be able to see the output without issues. However, the situation is quite different when the reflective execution happens remotely: the cmdlet won’t be able to retrieve the output of executables and DDLs have to be modified to return a string allocated on the heap in order to be processed by the caller. (e.g. Powerkatz) I wanted to find a general solution that didn’t required manual changes to payloads in order to capture their output when run remotely: what if we would be able to entirely redirect the file descriptors baking the stdout/stderr of the process when executing arbitrary shellcode in a new thread inside the beacon process in order to reliably capture its output? I experimented with the Windows APIs in order to find out if this was technically feasible. The idea I had was based on the fact the file descriptors can be redirected to arbitrary handles, such as an anonymous pipe. So what happen if we redirect the stdout and stderr to anonymous pipes, we allocated an executable are of memory, we copied the position indipendent code generated by Donut, we create a thread and then we read from the other sides of the pipes? By using the following snippet of code, I was able to confirm the initial intuition and successfully capture the “Hello World!” string.

After having a working proof of concept of the template skeleton, what it was remaining to do was to convert it into the specific syntax required by Beacon Object Files Dynamic Function Resolution to make it compatible with the brand-new, built-in inline loader baked into the beacon. In particular, we need to concatenate the various files into a single one in order to produce a single object file (FYI i tried using ld -r to merge multiple object files but without success) and declare the imported functions using the DFR syntax. At this point, we should have the ability to convert anything supported by Donut into a single object file compatible with the inline loader and capture its output, which we can send back to our server using the BeaconPrintf function. As expected, everything works correctly but there few main downsides to this approach:

How can we tackle the mentioned drawbacks? For instance, we can follow this approach:

As always, you can find the source code in the PEzor repository.